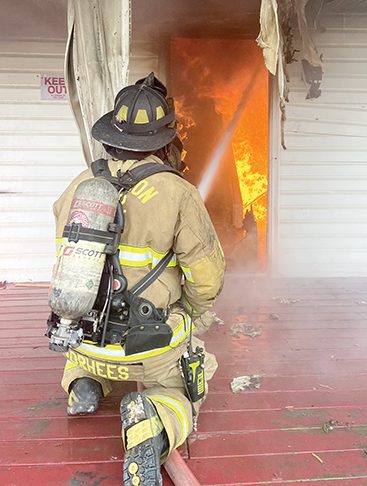 The Buckstone and Creek Bend developments that will bring hundreds of homes, apartments and potential commercial development to the area is a boon for the city of Obetz, but how will it impact emergency services provided by the Hamilton Township Fire Department?

According to Obetz City Administrator Rod Davisson, Obetz is using a layered incentive program to maximize money available for infrastructure improvements as well as supporting local services of the schools and the township.

“The goal of a CRA is to stimulate economic development and revitalization in a specific area,” said Davisson.

According to Davisson, a TIF helps attract new development and improves the quality of life for residents by providing needed infrastructure projects attributable to the TIF area development. A NCA is a quasi-government agency created to oversee and implement development projects in a specific area.

Before the developers broke ground on the Buckstone project, and not unlike its Creek Bend counterpart, the area was unimproved farmland owned by two local families.

During the first 15 years of the project, abated real property taxes are attributable to improvements like streets, curbs and gutters.

Hamilton Township continues to collect the same revenue it received for the unimproved farmland—roughly $9,490 according to Davisson—during the same period, but Hamilton Township is not on the receiving end of additional revenue until year 16.

When the CRA expires at the end of the 15 year cycle, the TIF ramps up tax revenue for the township for the remaining 15 years of the 30 year period.

“The township’s real estate property tax revenue during the period (years 16-30) is projected to increase from $9,408 a year to about $751,406 annually,” said Davisson. “Obetz is proud to be the force behind changing the lives of the people in the region—not just Obetz—dramatically and for the better.”

While the potential revenue from the Buckstone development, as projected by Davisson, could reach more than $60 million over the next 50 years, the reality of the here and now paints a tight financial picture for Hamilton Township.

“We have a levy coming up,” said Hamilton Township Trustee Chris Hahn, who said the township, not unlike other municipalities, is having issues staffing emergency services. “With the fire department in particular (anticipating an increase in calls with new development), we’ll be supplying the service, but not getting the benefits (for the next 15 years). We’re just going to have to get really creative. Obetz could help us out in ways other than taxes.”

In addition, new apartments going up along Lockbourne Road are three stories high, but the fire department’s current equipment can only reach two stories. The department would need to rely on mutual aid from Columbus for use of a ladder truck, which could impact response time.

Neighboring Madison Township, which covers a small portion of Obetz, is in the process of ordering a ladder truck at a cost of $1.18 million. The truck will be outfitted with a 75-foot Quint-style aerial ladder capable of reaching the roof of an average warehouse. However, it is anticipated to take more than two years to put the vehicle into service.

In a related issue, on March 23, 2018, the 132nd Ohio General Assembly’s House Bill 69 became effective. It requires reimbursement of certain township fire and EMS levy revenue forgone due to creation of a municipal TIF district.

According to the Ohio Legislative Service Commission, municipal corporations creating TIF districts would be required to reimburse townships for fire and emergency medical service levy revenue foregone because of the district.

When asked if Obetz has any plans to mitigate the impact of increased calls for service for the new development prior to year 16 of the financing package, Davisson responded, “It is not our place to determine the needs of the township as far as their resources are concerned. The city has committed to provide all the support requested by the township. As far as what that is, why they wanted it, and how they will use it, you’ll have to see the township.”

“And, of course we follow the requirements of the law,” Davisson said when asked about the city’s compliance with HB 69.