Conservative planning is paying off for Canal Winchester Schools in weathering the financial impacts of the coronavirus pandemic.

According to Treasurer Nick Roberts’ April summary of the district’s five year forecast, although revenue was under expenditures by $273,000 due to timing in receiving significant revenue sources, he is forecasting an ending positive cash balance $627,000 higher than a previous October forecast.

“Cash-wise, through the five-year forecast, we’re still sitting pretty nice,” said Roberts, who said the only impact so far on district finances is in state revenue.

While he expects a cut between five and 20 percent of nearly $1 million dollars, he said the district is “probably in the top five percent of school districts in Ohio” that can weather the financial storm because of planning.”

“We are in control of our destiny, not COVID-19,” said Roberts, who admitted it will be a financial juggling act in the upcoming months. “We’ll continue to be strong.”

“This is cause for concern considering the prior year had higher claims,” said Roberts’ “The district experienced drastic reductions the last two months due to the COVID-19 restrictions. We anticipate claims increasing again once the restrictions are removed. We will need to elevate plan design if this trend continues.”

During the same meeting, Superintendent James Sotlar said the high school construction is ahead of schedule.

The former high school office was dismantled, including removal of walls, and will become a student commons area and the old media center now serves as the office. 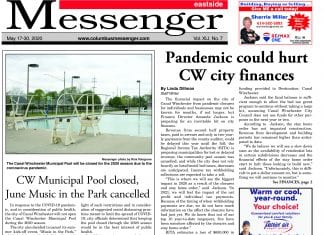