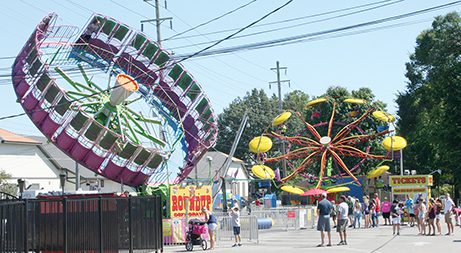 The 100th anniversary of Canal Winchester’s Labor Day Festival and return of the three-day event after a two-year hiatus is cause for a celebration.

Food, rides, a car show, activities for all ages and entertainment—including nationally-recognized singer and musician Uncle Kracker—will fill the streets of downtown Sept. 3-5 and draw more than 30,000 people to the city over the course of the festival, which is free and open to the public.

“This is our 100th Labor Day Festival,” said festival committee Vice-President Mike Coolman. “We have one of the longest running festivals in Ohio. Though the event has changed greatly over the many years, longtime residents love the memories of going as a child to the event, then taking their children and then grandchildren. It is a part of our city’s history and our city’s charm.”

According to Coolman, changes were made this year to accommodate more seating for entertainment and to offer something different for both younger and older children.
“We’re very excited to be bringing a mechanical bull ride to the event, as well as a zip line, and Ninja Warrior obstacle course as well,” said Coolman. “Some of the favorites that are returning are our long-time food vendors such as Amish Donuts and Jimmy Jawbreakers and the beer garden as well. Labor Day weekend in Canal Winchester is when most of the class reunions take place, and the groups love to gather in the beer garden throughout the festival.”

Planning for the 2022 event started in the fall of 2021. The committee had no idea, as with the past two years, whether they would be able to carry out their plans because it takes almost a full year to put together an endeavor as large as the Labor Day Festival.

By February of this year, Coolman said committee members were fairly certain they could host the centennial festival even though COVID had not disappeared, but numbers weren’t rising dramatically either.

“Because this is our 100th Labor Day event, we knew we wanted to bring in nationally well-known entertainers,” said Coolman. “Once the committee chose who they wished to bring in, contract negotiations began. While this is going on, the committee is also busy listening to and discussing other entertainers we wish to hire to play during the festival. By November, we began reaching out to various food trucks, ride vendors and possible parade participants. We work on these areas right up to the month before the festival sometimes.”

Although the festival is free to the public, sponsorships, individual contributions, and grant money from a variety of sources fund the average $70,000 price tag for the three-day event.

This year the costs are higher because Uncle Kracker is performing and a larger stage is needed to meet his needs and to create a larger viewing area for his concert.

“We don’t charge admission,” said Coolman. “Our entertainment has always been free and will be free again this year.”