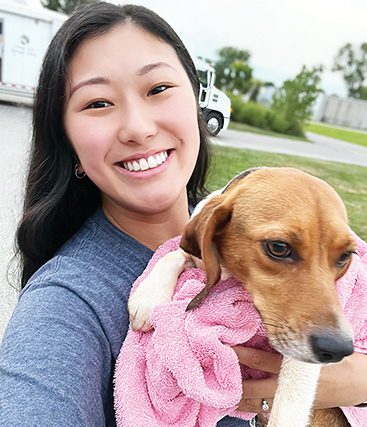 CHA Animal Shelter has received 10 beagles at its shelter in Columbus as part of the group of beagles to be removed from a mass-breeding facility. The Humane Society of the United States is coordinating the removal of approximately 4,000 beagles housed at a facility in Virginia, which bred dogs to be sold to laboratories for animal experimentation.

The transfer plan was submitted by the Department of Justice, with the agreement of the Humane Society of the United States to assume the responsibility of coordinating placement. The transfer will take place in stages over several months, and the dogs will be up for adoption via CHA and other shelters and rescues.

The beagles have received initial veterinary care and are scheduled to be spayed at CHA in the coming days. Once spayed, many will be placed up for adoption immediately so that they can start the journey of finding families. While many of the beagles are showing resilient personalities and are actively seeking out attention from staff and volunteers, a few are very shy and will likely spend some time further decompressing before they are ready for adoption.

“CHA Animal Shelter is grateful to have the opportunity to partner with the Humane Society of the United States to help beagles from the breeding facility,” said CHA Executive Director, Kelsey Smucker. “Looking into their soulful eyes, it is wonderful to know that they are no longer destined to be used as laboratory animals and that they will instead live comfortable and safe lives with adoptive families.”

The transfer plan comes as a result of a lawsuit filed against the breeding facility by the Department of Justice in May, alleging animal welfare act violations.

“It takes a massive network of compassionate, expert shelters and rescues to make an operation of this scale possible,” said Lindsay Hamrick, shelter outreach and engagement director for the Humane Society of the United States. “We are deeply grateful to each organization that is stepping up to find these dogs the loving homes they so deserve.”