As someone who regularly uses his bicycle as a mode of transportation and recreation, Michael Hodges knows how to react when its operation goes awry. And yet, almost unbelievable to him, it was not the bicycle that was causing a series of unfortunate events.

“I usually have a good handle on this thing,” joked the resident of Columbus.

According to Hodges, it was not totally his fault when he nearly slid off the saddle and onto the top tube due to a sudden brake, nor was it totally his doing as he fought to keep his bike upright while trying to engage the kickstand without looking.

Though he did admit to slight operator error, he believes that the primary source of his unusual mishaps was due to the creation of “the most beautiful piece of art.”

Having lived on the westside prior to his move downtown, Hodges says he likes to stay attuned to the happenings in the area and when he heard that a new mural dedication was taking place on the Hilltop he knew he needed to be there.

“It wasn’t the artwork I was initially interested in seeing,” he said. “I was more interested in saying goodbye to Patti (Von Niessen, the founder and retiring executive director of Summer Jam West) and telling her what an outstanding job she and the organization has done in this community.”

But as he and his trusted bicycle were traveling east on Sullivant Avenue toward the event, he came across the vividly painted building “flowing with life” and experienced a bit of tunnel vision as he tried to stay upright.

“It was hard not to be drawn in to it,” he said, referencing the green and purple mural featuring a woman challenging the public with a stare to look around at the world. “It is just an incredible creation that is flowing with life.”

The members of the Summer Jam West board who selected the initial rendering by Michael Boudreault and Chris McDaniels thought so too.

“It is a stunning vision that fit harmoniously with this year’s theme of “coloring your world green” and making a positive impact on your environment,” said Von Niessen at the June 25 event. “It manages to shine a light on pollution while still showcasing that there is plenty of beauty left to be found in this world.”

According to Von Niessen, the non-profit organization had a difficult time reaching a consensus while pouring through the submissions from artists across the region looking to create the permanent mural on the Hilltop.

“There were so many wonderful artists to choose from,” Von Niessen said, “but we all had this creation from Michael and Chris on the top of our individual lists.”

After consulting with Kim and Rick Payne, the owners of the property at 3045 Sullivant Ave., they decided to select the duo from Artisan Rooms for this year’s major public artwork.

“I think we made a great choice,” said Von Niessen as she soaked up the mural, “and I think they did a fantastic job.”

Having received commissions throughout the country to create original artwork for businesses and private residences, Boudreault and McDaniels said they were thrilled when they learned they were selected to bring ‘Color Your World Green’ to life on the Hilltop.

“We thought it would be a great opportunity to bring a piece of art that has a message to the community,” said McDaniels, “but what that message means will be entirely up to the viewer.”

It took the painting and designing team approximately two weeks to complete the mural, but at one point McDaniels thought it would take much longer as so many people stopped to talk to them about their creation.

“It was a little overwhelming but in a good way,” said the resident of Cleveland. “Every 10 minutes people would stop by to ask questions, give us a compliment or to thank us for bringing art to the area.”

He said the employees at the neighboring Wendy’s Restaurant – and even those waiting in the drive-thru lane – were also quick with a comment or an offering of praise.

“Michael and I have been working together for years and I cannot remember a time where we have had such an outpouring of positive feedback from the public.”

It was a tradition that continued during the dedication ceremony.

Hodges says he does not consider himself to be an expert in the field of art, but he said he knows how it feels when a creation speaks to the soul. And he said the piece by Boudreault and McDaniels spoke to his.

“It’s a mural that says a lot of things of importance,” he said, referencing its themes of nurturing your surroundings, “and it’s also an incredible thing to look at. It is an amazing and well-executed piece of art and I am glad that it will be seen by everyone coming down Sullivant Avenue.” 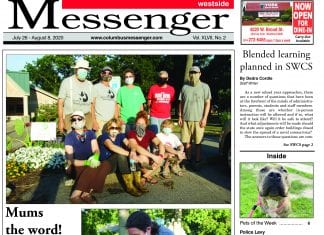