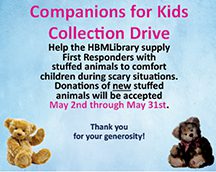 Two local libraries are teaming up for an outreach project that is all about providing comfort to children in traumatic situations.

Hurt/Battelle Memorial Library in West Jefferson and London Public Library are asking the public to donate new stuffed animals as part of their Companions For Kids drive. The libraries will distribute the stuffed animals to local first responders to have on hand to give to children involved in traumatic emergency situations, such as traffic crashes or domestic violence cases.

The libraries are accepting donations from May 2 through May 31. Stuffed animals should be of reasonable size for first responders to store in their vehicles.

Melissa Woodard, outreach coordinator at Hurt/Battelle Memorial Library, said she got the idea for the drive after hearing that a co-worker’s husband, a sheriff’s deputy in another county, had recently run out of stuffed animals for his cruiser. She thought it would be a good project to do locally.

“As a library, we’re supposed to support our community just as they support us with tax funding and that type of thing,” Woodard said. “In my opinion, a good part of outreach is helping people in the community who need it.”

This is the second time West Jefferson and London libraries have worked together to help people in need. This winter, they collected a total of 165 blankets which they distributed to homeless people in Madison County, HELP House Community Outreach in London, and Good Samaritan Food Pantry in West Jefferson.

“These types of fundraisers are always well received. We get a lot of contributions, and we have a lot of people who benefit from them,” Woodard said.

Non-traditional outreaches are becoming traditional at Hurt/Battelle Memorial Library, said Director Chris Siscoe. Each year, the library collects dresses and suits, welcoming high-schoolers to browse for formal wear for prom. They do the same with Halloween costumes. Other outreaches have included collecting pet food for the Humane Society of Madison County, collecting school supplies for children in need, and distributing COVID-19 tests.

“Bigger cities have a lot of agencies that can do a lot of these kinds of things. Sometimes these things fall by the wayside in smaller towns,” Siscoe said. “We’re looking for ways we can fill holes in the community.”