Groveport residents have indicated what they would like to see in the city’s downtown and city officials are making plans to make it happen.

“One thing we hear all the time from residents is that we need more restaurants and more businesses,” said Groveport Finance Director and Assistant Administrator Jeff Green at a public forum about business development held on Oct. 23 at The Links at Groveport. “We listened to you and now we want to put the information we gathered into tools we can use to develop branding and market strategies for the city.”

Branding and marketing strategies
Jay Schlinsog, of Downtown Professionals Network, presented proposals to redesign the city’s logos, update the city seal, and use two shades of green, blue, and gray as the colors in the city’s marketing and promotional materials.
He said Groveport’s historic qualities, its abundance of trees, and the city’s small town feel are quality of life pluses for attracting businesses.

Green said the city could begin using the updated branding tools to market the city by January, if they are approved by Groveport City Council sometime in the next two months.

Some items that could be used to market the city are new decorative street banners, promotional products that feature the city’s logos, ads, target marketing and the use of business and shopping guides as well as pamphlets.

Part of the marketing strategy, according to the proposed “Historic Groveport: Market Study & Strategy” includes targeting business prospects who: have prior experience within the region; have a connection to Groveport; have concepts or business models that are consistent with what residents want according to the city’s recent online survey; and who are attracted to Groveport’s one-of-a-kind quality of life and amenities.

Survey results
An online survey about the future of the city’s Main Street and historic business core was conducted from July 30 to Aug. 13.

The online survey was part of the Groveport Community Improvement Corporation efforts to conduct a local market analysis, plus research the development of marketing and business recruitment strategies and branding for the city’s downtown. The CIC is working with Downtown Professionals Network. According to city officials, this local retail market analysis, which the survey was part of, cost $11,200. The city’s last market study was done in 2003, with an update in 2011. The 2003 study cost the city $3,620 and the 2011 update cost $8,200.

Of the 578 survey participants, 36 percent want to see a restaurant/diner in the downtown and 19 percent said they’d like to see a full service restaurant.
In regards to potential retail establishments in the downtown, 38 percent of survey respondents want a bakery, 22 percent a vintage store, 10 percent desire an arts/crafts/hobby store, 8 percent an outdoor and recreational sports store, 8 percent for a consignment boutique, and 5 percent for a pet store.

Ben Muldrow, of Arnett Muldrow & Associates, said of the business prospects, “Some of the best opportunities are working with businesses that are already here to seize on the untapped potential.”

“Groveport is an amazing community and there are lots of opportunities here,” said Green. 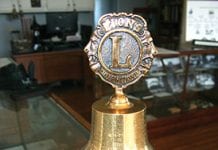