The former McDorman Auto Museum is getting new life as the hub of government activity as Canal Winchester City Council approved the purchase of the building.

In the works for months, and facing pushback at times from community members, the $2.4 million owner-financed agreement between the city and Alice McDorman is for a 10-year term with the city making quarterly payments of approximately $73,000.

“It’s probably the best use of the building,” said Councilwoman Jill Amos, who also wanted to make certain the city holds conversations with community center staff to ensure their needs are met throughout the process.

The building was initially listed at $3.2 million. Part of the contract with Alice McDorman includes naming rights as the Bob McDorman Building.

Another $2.2 million is budgeted for renovations. That cost, according to Finance Director Amanda Jackson, will be initially funded through a short-term loan. During a December public hearing, Jackson said the city has no intention to ask residents for additional debt to cover costs.

“Financially speaking, our general fund is very healthy,” said Jackson. “Typically, we only budget what we think we’ll take in and we’ve done very well.”

Preliminary plans include a new community center in the west end of the building, approximately 8,000-square-feet of empty space in the east end of the building the library is considering as a new branch, a doubling of council space seating with overflow space available for larger crowds, expanded office space, meeting rooms and security upgrades.

“They’re (Columbus Metropolitan Library) doing their due diligence on their build out costs,” said Development Director Lucas Haire when asked about the status of the library’s potential move.

With the demolition of the current Frances Steube Community Center, available parking spaces will increase and the Fairfield County Sheriff’s Department is considering moving into the present municipal building at 36 S. High St.

“There would be minimal construction done to that building,” said Mayor Mike Ebert if the sheriff’s department moves from cramped quarters in the basement of Town Hall.

As for the fate of Town Hall, the city has no plans to liquidate the structure, but its use after the new municipal complex opens is yet to be determined.

“We’re pretty excited about the possibility of moving into there,” said Sgt. Jesse Hendershot in discussing the potential transition to larger space, while still retaining a downtown presence.

According to the contract, it must be finalized by Feb. 12. 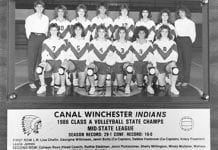 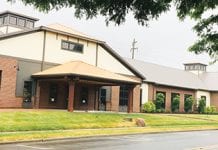