According to Toth, the union members and city representatives have already been through mediation.

“Both sides walked away with something,” said Toth. “The contract is fair.”

Council agreed with that. At the Feb. 18 meeting, council approved the contract with the FOP Capital City Lodge #9. The measure was passed as an emergency.

According to City Administrator Chuck Boso, the contract will cost the city $1.4 million in additional compensation. The contract covers 52 police officers, eight sergeants and two lieutenants.

“The FOP and the city’s administration worked very hard on this deal,” said councilman Ted Berry.

The city also provides vision and dental coverage, along with life insurance in the amount of the member’s gross annual base salary or $75,000, whichever is higher.

“The officers do their job well,” said Toth. “They serve the community well.”

Berry noted that he would like to see the city add officers to the department to offset some of the compensatory time.

Southwest Public Library extends closure until at least May 4 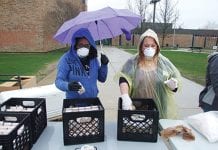