“Winning is about enjoying what you do in life.”

This is the message Plain City resident Eric Hanna drives home in his recently released book, “Fight to the End: A True Story of Determination” about his experiences as a walk-on player for the Ohio State University basketball team in the mid- to late-1990s.

Growing up in Canfield, Ohio, near Youngstown, Hanna got his first taste of basketball at a Saturday morning league run by the coaches and players of the local high school. Though he went on to score just one basket each of his sixth-, seventh- and eighth-grade years, he was hooked.

Hanna worked on his game whenever he could, but often was one of the last players called off the bench in high school. He struggled with feelings of inferiority, skipped playing basketball his junior year, but returned as a senior and ended his high school career as the team’s most improved player. 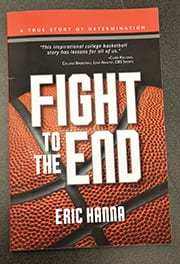 Those years were full of ups and downs for Hanna. He didn’t rack up a lot of stats, and again, he had moments when he wondered about his value and place on the team. But he also had many more moments that reinforced what he was learning then and firmly believes now: “It’s more valuable to love being part of something bigger than yourself and to love the game itself”–and the same goes for life.

Hanna’s resilience and dedication resulted in his receipt of the Fred Taylor award as the Buckeye player with highest GPA and the John Havlicek award as the most inspirational player in his final year with the team.

“I wanted to write this book to inspire other kids who aren’t starting and not playing the role they want,” Hanna said. “I really felt I had a story that could help kids enjoy the sport and passion they have for it.”

Not only is “Fight to the End” about valuable life lessons, it’s also an engaging and unique insider’s view of Buckeyes basketball, from the grind of practices to glorious moments like starting in the last official Buckeyes basketball game to take place in the hallowed St. John Arena.

Hanna donated copies of his book to Plain City Public Library and Plain City Elementary, where two of his children attend school and a third will start this fall. Hanna, his wife, Jodi, and their children have lived in Plain City for the past couple of years. Hanna teaches eighth-grade American History for Olentangy Schools and is the director of basketball for the Plain City Area Ball Association.

Released by Warren Publishing of North Carolina, “Fight to the End” can be purchased on Amazon, at Barnes & Noble, and at fighttotheend.net.

“Fight to the End” includes a foreword by Buckeyes standout Scoonie Penn, who was a red-shirt transfer during Hanna’s last season with the team.