Home Groveport Messenger A walk through a delightful garden

The awe of entering Joe and Mariann Stewart’s garden for the first time feels like the wondrous sensation Dorothy must have felt when she stepped out of her drab world and into the colorful Land of Oz.

The garden, located in the backyard of the Stewarts’ home in the city of Groveport’s Newport Village subdivision, is a bright pallette of a wide variety of flowers, bushes, and trees. The garden includes meandering grass walking paths that allow one to explore and immerse oneself in the garden’s free flowing, beautiful, and peaceful delights. 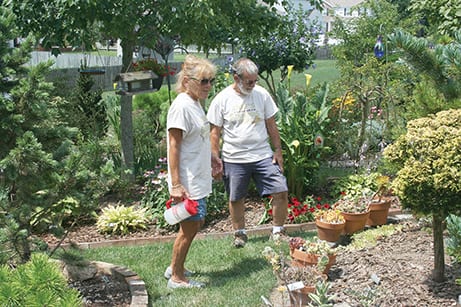 The Stewarts’ home was built in 2004 and the only plants there at that time were three maple trees and a flower bed on the east side of the house.

Mariann produced a photo from 2004 of the backyard when it was bare dirt and scrub grass. In 2008 the Stewarts began to transform the yard and now, more than 10 years later, the backyard is a lush, green, and vibrant garden.

“I’ll be working in the garden weeding now and then and I’ll take a moment to stop and look around the garden and I think, ‘This is remarkable,’” said Mariann.

“I’m not a fan of grass,” said Joe. “I like to collect plants and I started by collecting conifers about 20 years ago. Our garden now has 160 different kinds of conifers, 17 different Japanese maples, 7 or 8 gingkos, a wide variety of blooming flowers, bushes, and even raised vegetable beds with carrots, Swiss chard, potatoes, tomatoes, leeks, onions, beans, and watermelon.”

Joe called the garden “a collector’s garden” and it includes small signage that labels the plants by name, when they were obtained, and when they were planted.

On July 14, the Stewarts held an “open garden” event and invited people of the community to visit and explore the garden.

“It’s an educational garden and we like to share it with people,” said Joe about holding the open garden event. “Plus, mid-July is when most of the blooms are in their peak of color. We love showing off the garden. The yard says, ‘Look at me!’ So why hide it?”

Joe said he and Mariann plant “what we like.”

He noted the garden is colorful year round.

“It’s pretty each season,” said Joe. “For instance, with the conifers. In the winter they look bronze, in the spring they’re yellow, and in the summer and fall they’re green. The garden is ever changing.”

Besides the plants, the garden also has a variety of whimsical art works, such as a bird bath with a depiction of the face of the sun in its basin and some old iron fencing that features a tiny wrought iron bird resting upon it. Other pieces of art include a metal bed headboard frame that has flowers growing on it, a sundial, a small, white enamel metal tub containing flowers, a colorful old bowling ball, small statuary, and many kinds of animal sculptures.