Although the historic circus act performed its final show May 21, it will live forever in the heart of Sellitto, who as a showgirl for the circus, lived a life that most can only imagine. Now 69, she spent much of the 1970s riding elephants, performing aerial ballet, dancing and flying through the air on the trapeze.

It was one of the most memorable times of her life, she says, meeting people from all walks of life as she toured the United States and Canada by train.

On Aug. 19, Sellitto will share those experiences, as well as the memorabilia she collected from the circus, at the Reynoldsburg-Truro Historical Society, 1485 Jackson St. Sellitto will be on hand during the organization’s monthly open house from 10 a.m. to 2 p.m., answering questions about circus life and sharing her memories of a time when the circus inspired the imaginations of children and adults alike.

What was known as “The Greatest Show on Earth” began in 1871 as P.T. Barnum’s Grand Traveling Museum, Menagerie, Caravan & Hippodrome.

Nearly a century later, in 1970, Sellitto joined the circus, fulfilling what for many was only a dream.

“I am bringing posters, lots of pictures, parts of costumes, a picture painted by an elephant, roustabout overalls, route cards from the train and years of circus memories,” she said. 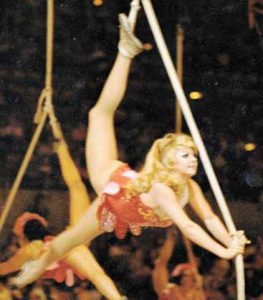 Along with several scrapbooks and memorabilia she collected during her years in the circus, Sellitto still has the letters she wrote home while traveling. In one, she notes how she was about to climb 40 feet in the air, in high heels and in the dark, only to hang by her knee. She joked with her mother, “Isn’t it nice to know that’s why you sent me to college?”

As a showgirl, the Ohio University alumna often found herself suspended in the air performing aerial ballet – whether it was by her knee, wrists or ankles – while sometimes wearing a headdress that weighed as much as 30 pounds.

She also served as the “Bluebird of Happiness,” which required wearing a bright blue costume, a heavy headdress and a 17-foot blue ostrich feather train. Other memories include feeding and playing with baby tigers and riding her elephant, Targa, who enjoyed having her tongue rubbed and being fed whole loaves of bread.

“We would run all the way to the top so we could watch him up close as he did it,” she said. “Took your breath away.”

When the Ringling Bros. Barnum & Bailey Circus officially closed this spring, Sellitto said she and other alumni were devastated.

“None of us clowns or showgirls or anyone can figure out what is going on,” she said. “But we’re all suspicious and we’re all heartbroken. Much mourning going on.”

She hopes her memories of the circus will live on, however, by sharing her stories and encouraging others to dream big. For more information on the Reynoldsburg-Truro Historical Society’s August open house and future events, go to rths.info.

Get those skeletons out of your closets!

Firefighter reunites with girl he helped to save