Home Madison Messenger A glimpse at what local librarians are reading 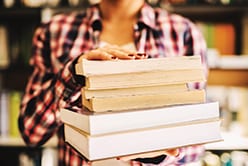 It’s that time of year when the Madison Messenger picks the brains of area librarians to find out what they’ve been reading for their own entertainment.

In “Fighting Words,” we meet 10-year-old Della and her 16-year-old sister, Suki, in foster care. Della barely remembers her mother who has been in prison for the last five years for a meth-cooking incident. As we journey with the sisters, secrets are revealed about their time spent living with the mother’s predatory boyfriend. You’ll root for the girls as they try to come to terms with their past, as they make their permanency plan.

“I was excited for the next installment of the Cormoran Strike series, ‘Troubled Blood’ by Robert Galbraith (pen name for J.K. Rowling),” Wood said about another book she enjoyed this year. “I think she is such a wonderful storyteller. She creates a wide array of characters and story lines to get caught up in.”

This is the fifth in a series of books featuring London-based detectives Cormoran Strike and Robin Ellacott. It is independent enough to stand on its own, but more enjoyable if read as a series, Wood said. Multiple investigations take place with one always high-profile case. This time they have been hired to solve the 40-year-old case of a disappearing doctor. Numerous suspects lead them down many paths, keeping the reader guessing to the end.

“I have been reading him for 40 years,” Siscoe said.

“In the tradition of ‘The Shawshank Redemption’ and ‘The Body’–made into the movie, ‘Stand By Me’–King cements his reputation not only as a horror writer but also as a great American novelist,” Siscoe said.

He’s also looking forward to reading “Bombshell,” written by Stuart Woods and Parnell Hall, the newest title in the Teddy Fay series. Fay is a former CIA operative turned movie producer who must use his undercover skills to survive in Hollywood’s underworld.

Also on Siscoe’s list is “Near Dark” by Brad Thor, a story that brings the spy world to life. In this gripping tale of espionage, Scot Horvath, America’s top spy, just had a bounty put on his head. He must outwit assassins as he attempts to complete his most dangerous mission to date.

Amanda Warner
Public services librarian – Plain City Public Library
Among the books Amanda Warner enjoyed reading this year was “Such a Fun Age” by Kiley Reid. The book tells the story of a young woman who is wrongly accused of kidnapping the child she is babysitting and the events that follow this incident.

“I enjoyed this novel because of its satirical take on the issues of race and privilege. This is Reid’s debut novel, and I look forward to reading more from her,” Warner said.

“Circe” by Madeline Miller, the story of the goddess from Greek mythology, is another book that stood out for Warner.

“I enjoyed how this novel wove all of the tales of Circe together into a chronicle of her life, including many other mythological figures along the way,” she said.

Warner also recommends “The Mermaid, the Witch, and the Sea,” a gender-bending young adult novel by Maggie Takuda-Hall that includes pirates, mermaids, magic, and plenty of action.

“The author has created unique characters who inhabit a dangerous and magical land and is so well-written that it is hard to put down,” she said.

Sharon Morgan
Interim director – Mount Sterling Public Library
Sharon Morgan has always loved reading biographies and autobiographies. She feels she found a great one in “The Answer Is… Reflections on My Life” by Alex Trebek, longtime host of “Jeopardy!”. Morgan finished reading the book a short time before Trebek’s death on Nov. 8.

“I enjoyed learning about how he came up from almost nothing. He started in radio then made the jump to television. All at once, everyone liked him and wanted him. He juggled jobs in Canada and the U.S. for awhile, which I thought was cool,” she said.

Morgan said the book is well written and will appeal to anyone who likes biographies, rags-to-riches stories, “Jeopardy!” or Trebek.

“It really fits lots of bills,” she said.

“I was disappointed in it. I felt like she didn’t follow through with her characters,” she said. “Still, it’s a good book, and if you like the series, I would recommend reading it.”

Morgan considers Evanovich to be a great mystery writer and loves that she weaves humor into her writing. She also loves that, on the whole, Evanovich develops great characters in her books.

“They’re interesting, bold, fantastic, and some of these people truly are characters,” Morgan said.