The steep hills and sharp curves of the roadway in Darbydale and Georgesville can pose a challenge for any biking enthusiast, which is why Sarah and Rodger Lynch spent most of the month of May and June tackling the paved beasts.

“That area offers some of the best preparation for the most difficult rides out there,” said Rodger.

And he would know.

Though discovering a love of distance biking at age 10, the West Jefferson resident never believed he would do longer and more arduous tours until his 50th birthday approached.

“I got it in my head that I wanted to go coast-to-coast so I tossed the idea by my wife who told me to go for it, and that was that,” he said.

His tour across the United States took place in 2000, and while his touring nationwide touring distance to date has not exceeded that mileage, his international flying and riding miles are getting quite the workout.

It was around seven years ago when Sarah’s relatives announced that they would be participating in L’Eroica, a famed bike tour in Italy that introduces riders not just to challenging landscapes but also to Italian music, dining, entertainment and culture.

Wanting to support her family, Sarah and Rodger met them in Gailoe and developed a biking itch along the way.

“We knew we wanted to do this in the future,” said Sarah, a native of Richwood, Ohio who has been living in West Jefferson for 25 years.

They participated in L’Eroica in 2016, but shoddy rental bikes kept Sarah from completing the tour. They did, however, get to eat plenty of authentic Italian food and experience the beauty of the country.

“It was a great trip despite the terrible bikes,” said Rodger.

While searching for their next international touring destination, the couple decided upon Eroica Limburg, which takes place in the Netherlands. Through the magic of the internet, they experienced the route and knew they had to prepare accordingly.

“It looked like a lot of hills,” said Rodger.

To prepare, Sarah and Rodger used the hills and curves of Darbydale and Georgesville to mimic the twists and turns and hills in Europe. 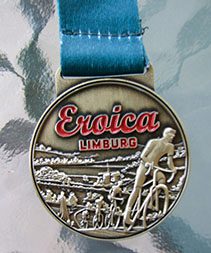 Upon arrival in late June, they were driving through Valkenburg to get near the starting destination and lamented about the roads.

“There was this one great steep hill and I said I hoped we didn’t have to tackle it,” said Sarah with a laugh.

It turned out to be one of the retro bike tour’s first challenges.

For nearly seven hours, the couple rode 70 miles on their vintage bikes and experienced not only the lush countryside of the Netherlands and parts of Belgium, but the food, music and entertainment of the friendly host country.

“It was such an incredible experience,” said Sarah, recalling the rice and fruit pies and soups and drinks that were prepared for them as participants. She joked that she ate more calories than burned during Eroica Limburg.

Back in West Jefferson, where the skin of Rodger’s knee is still healing from a fall on the gravel roads, the couple is preparing for their next biking adventures. First comes the Great Allegheny Passage in October, and then possibly Eroica Great Britain for Rodger’s 70th birthday in 2019. Expect to see them navigating the hills and curves of Madison and Franklin Counties to prepare for their upcoming journeys.